The Bonneville remained Pontiac’s costliest and most luxurious model throughout the 1960s and was instrumental in pushing Pontiac to third place in sales from 1962 to 1970.
The distinctive protruding grille made its appearance on all Pontiac products during the early 1960s, and was a modern revival of a similar appearance on Pontiac products during the 1930s and early 1940s, as demonstrated on the Pontiac Torpedo.
The Bonneville differed from its lesser Catalina and Star Chief counterparts by featuring more luxurious interior trim with upgraded cloth and Morrokide vinyl or expanded Morrokide upholstery in sedans and coupes, expanded Morrokide in Safari wagons and genuine leather seating in convertibles. Bonnevilles (with the exception of Bonneville Safari station wagons) were also (along with Star Chiefs) built on a longer wheelbase version of GM’s B-Body. Also found in the Bonneville were instrument panels and door panels with walnut veneer trim, carpeted lower door panels, grab bar on the passenger side of the dash and courtesy lights and a rear arm rest.
Bonneville models were standard equipped with Hydra-Matic (through 1964) or Turbo Hydra-Matic (1965-on) automatic transmissions. Options included power steering and power brakes as well as air conditioning. Other popular options included power windows, power seats, radio, cruise control, and 8-lug aluminum wheels that included integral brake drums for improved stopping power. The Bonneville, also, had more powerful standard V8 engines than other full-sized Pontiacs, including the 389 cu in (6.4 l) or 400 cu in (6.6 l) V8s with four-barrel carburetors (power ratings of 303 to 340 hp (226 to 254 kW) depending on year) with many optional V8 offerings, such as the availability of the Tri-Power (three two-barrel carburetor) options on both the 389 cu in (6.4 l) and 421 cu in (6.9 l) V8s that offered up to 376 hp (280 kW) through 1966. 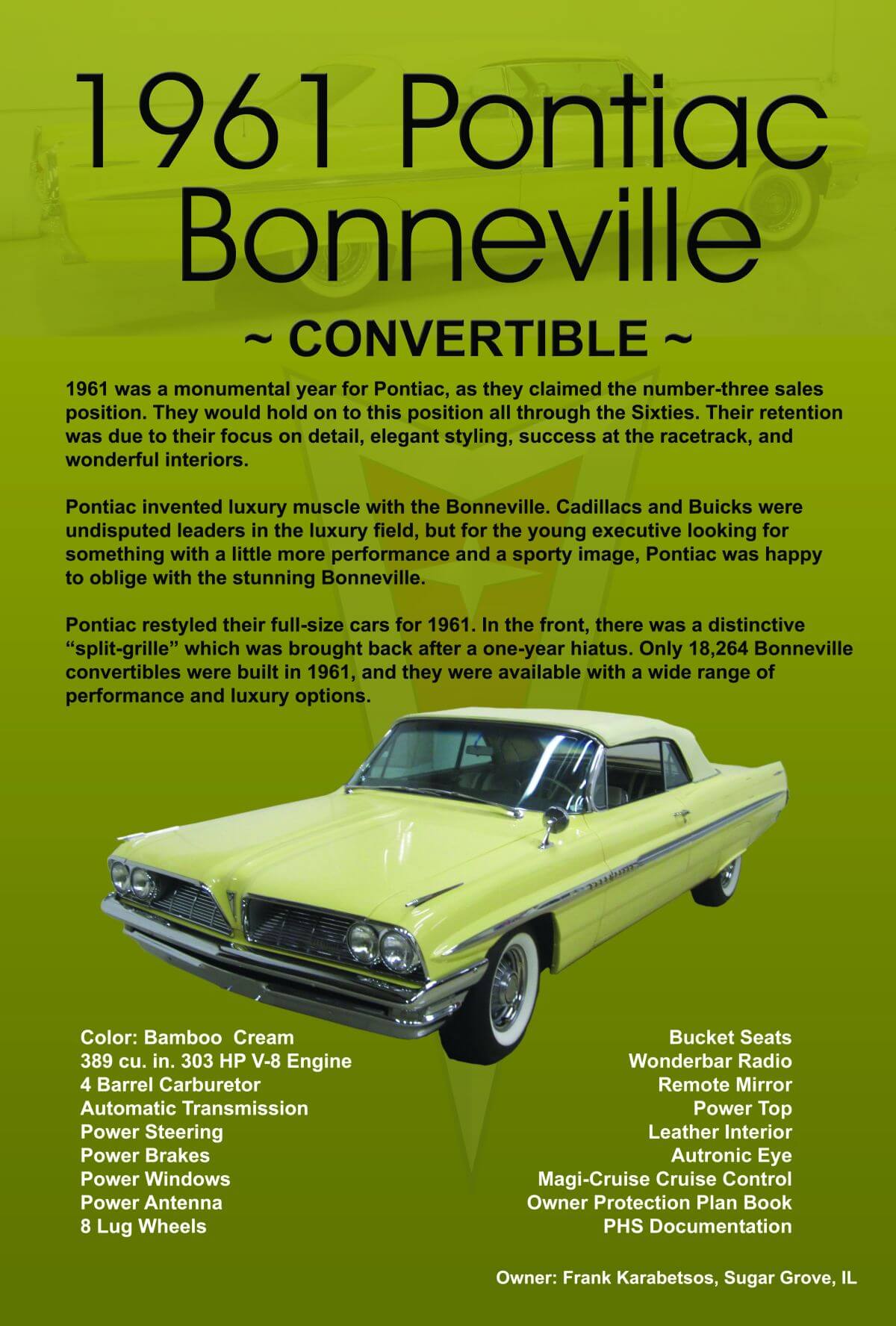