The Pontiac Bonneville became its own line in 1958, having been promoted from a performance upgrade on the 1957 Star Chief. The 1958 Bonneville was built on the same chassis, but as a true performance model, many of the standard creature comforts of the luxurious Star Chief line were optional. This helped keep the base price of the Bonneville under control, yet the $3,481/$3,586 price tag on the two-door sport coupe and the two-door convertible made the Bonneville the most expensive Pontiac in its year.

With this model being a candidate for the first true Pontiac muscle car, Bonneville buyers got a lot of power for their money. The base engine was a 370-cid, 255-hp V-8 with a Carter four-barrel carburetor and standard 3-speed manual transmission — or 285 horsepower with the optional Super Hydramatic automatic. Upgrade opportunities included Rochester fuel injection or a Tri-Power setup consisting of three Carter two-barrel carburetors, 10.5:1 compression heads, and a performance camshaft. The fuelie option delivered 310 horses while the Tri-Power yielded 300 horsepower. Of the two upgrade options, the Tri-Power was far more popular because you could add it to your Bonneville for just $93.50, while the fuel injection cost was $500.

For the aspiring stock car racer, a few Bonnevilles were delivered sporting a special “PK” package that included the four-barrel carb, 10.5:1 heads, special dual exhaust, and a few other alterations that raised the horsepower to 315. The “PM” package added the same features to a Tri-Power induction system for 330 horsepower. Both of these options were approved by NASCAR for competition and cost $254 and $320 respectively, which was still far less than the fuel injection.

On the outside, the Pontiac Bonneville carries the same space-age styling as the rest of the 1958 Pontiac lineup. It’s an attractive car available in two-tone paint with plenty of chrome. Options are typical for a car of this era with amenities such as a foam seat, power everything, air conditioning, and so on. Unique to the Bonneville, buyers could order the car with bucket seats — another indicator of the proto-muscle car design.

Collectors considering the 1958 Pontiac Bonneville have a choice between the coupe and the convertible. Of the two, convertibles amounted to approximately a quarter of the total production of about 12,250 cars. Most of these cars were delivered with automatic transmission, although there is evidence that at least one car was built with a special four-on-the-floor transmission for Daytona racing. Collectors will want to search for well-optioned cars featuring Tri-Power or Rochester fuel injection. PK and PM package cars were sold for racing purposes, making true surviving examples vanishingly rare. Provenance for such cars should be carefully evaluated. 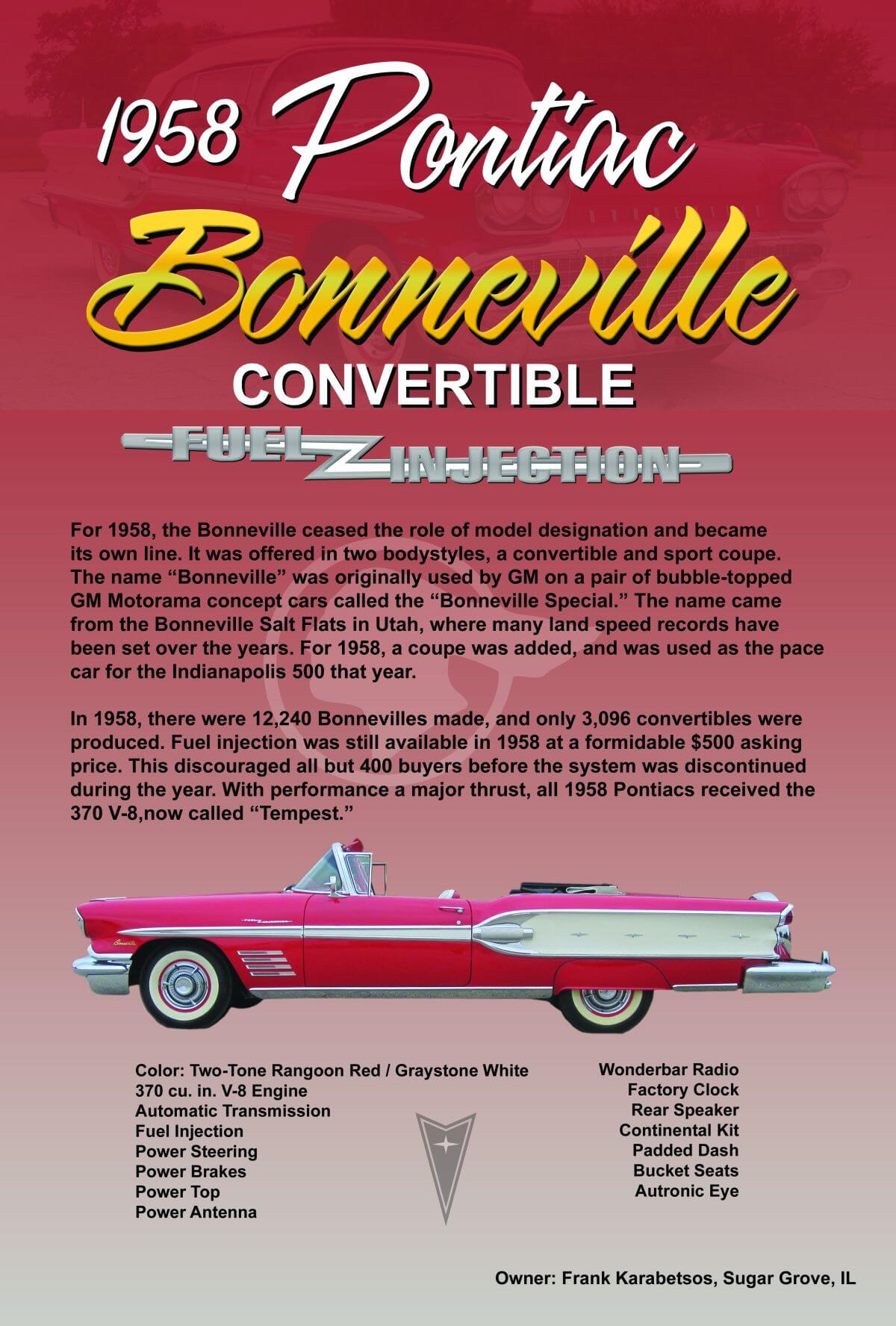