The very first Bonneville was a spectacular, chrome-laden convertible. When the 1957 Bonneville was introduced on January 11th of 1957, it was the fastest Pontiac ever produced. Zero to sixty took just 8.1 seconds. Appropriately, the car was named after the Bonneville Salt Flats in Utah,
the site of much early auto racing and most of the world’s land speed record runs. The $5782 sticker price was as high as its zero to 60 was low. For the Cadillac-like price, Bonneville buyers got a Cadillac-like level of standard equipment, including Hydra-Matic automatic transmission,
power steering, power brakes, eight-way power seat, Wonderbar radio, electric antenna, under seat heater, defroster, tri-bladed wheel covers, electronic eye automatic headlight dimmer, padded dash and full leather interior. There were only two options, air conditioning and a continential kit, everything else was included.

Power was supplied in abundance by a 347 cubic-inch V8 with Rochester mechanical fuel injection pumping out 315 horsepower. (Pontiac never released a specific rating for this engine, simply stating that its output was “in excess of 300 horsepower.”) The mechanical fuel injection system was a continuous-flow unit engineered by Harold Barr and Zora Arkus-Duntov. It is considered to be a better system than the Chevrolet version, with combined rather than separate manifold heater and pipes and better fuel meter placement. Bolted to a Hydra-Matic automatic transmission, power was delivered to a live rear axle sprung with semi-elliptic leaf springs. Independent front suspension with coil springs and four-wheel hydraulic drum brakes gave a luxurious ride.

Styling for the Bonneville was under the direction of division chief stylist Paul Gillan. It represented a second facelift of the design that was introduced for ’55. At the front were newly featured body-color hooded headlight rims, illuminated front fender ornaments and a bumper-grille ensemble with a series of fine vertical slots for a “waterfall” effect that was drawn up by future GM styling chief Irv Rybicki.
Behind the front wheels fender hash marks added to the illusion of speed. For the first time in a decade, Pontiac taillights were a shape other than circular; elliptical lenses fit into massive chrome bezels under fins that angled back and up. A sculptured chrome wrap-around bumper with integrated duel exhaust outlets finished off the rear style treatment. Body sides featured rocket-silhouette chrome spear trim that ran the full length of the car and provided for two-tone paint accents. Stylized “FUEL INJECTION” badging above the front wheel arches and centered on the trunk lid above the bumper boldly announced the level of performance to be delivered. The equally stylized “BONNEVILLE” badging
appeared above the “spears” on the rear fenders.

Only 620 Pontiac Bonnevilles Produced in 1957 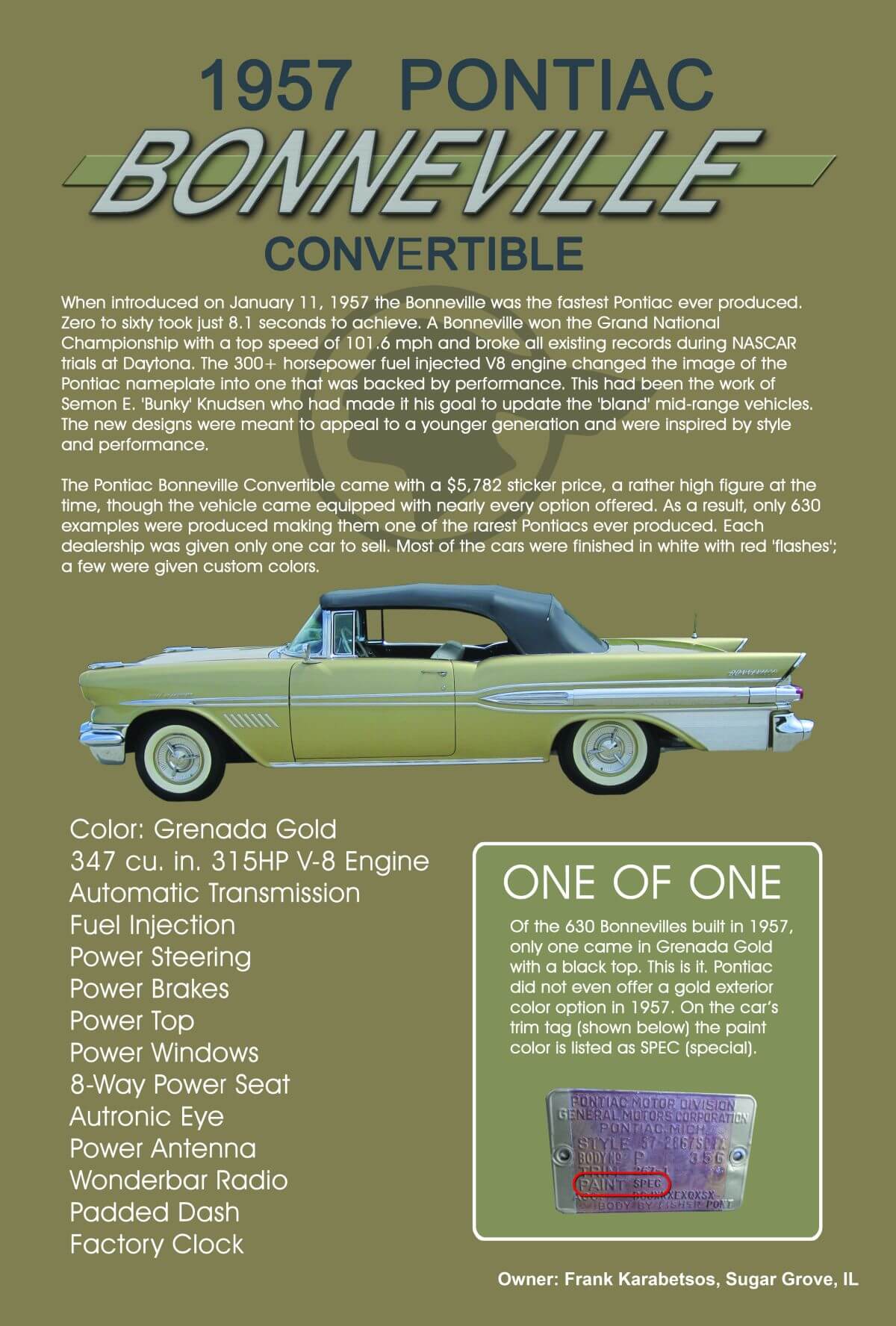