Only 717 Miles on the Odometer since the restoration

The 1956 Bel Air received a face-lift with a more conventional full-width grille, pleasing those customers who didn’t favor the Ferrari-inspired ’55 front end. Two-tone bodyside treatments and front and rear wheel openings completed the “speedline” restyling. Single housings incorporated the taillight, stoplight, and backup light, and the left one held the gas filler – an idea popularized on Cadillacs. Among the seven Bel Air models was a new Sport Sedan, a pillarless four-door hardtop that looked handsome with all the windows rolled down and allowed easy entry into the back seat.

Production exceeded 103,000, compared to 128,000 two-door hardtops. Shapely two-door Nomad wagons topped the price chart at $2,608, but now carried the same interior and rear-wheel sheetmetal as other Bel Airs, lacking the original’s unique trim. Only 7,886 were built. The least costly Bel Air, at $2,025, was the two-door sedan. Seatbelts, shoulder harnesses, and a padded dashboard were available, and full-size cars could even get the hot Corvette 225-horsepower engine.

In 1956 sales material there was an optional rain-sensing automatic top, which was first seen on the 1951 LaSabre concept car. However, it is believed that it was never installed on a car. Popular Mechanics reported only 7.4% of owners in their survey ordered seat belts. A ’56 Bel Air 4-door hardtop, prepared by Chevy engineer Zora Arkus Duntov, set a new endurance/speed record for an automobile ascending Pikes Peak. 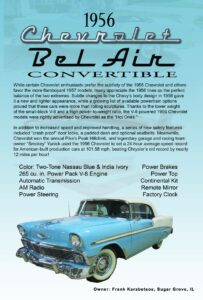